In this post I’ll cover three properties of isogonal conjugates which were only recently made known to me. These properties are generalization of some well-known lemmas, such as the incenter/excenter lemma and the nine-point circle.

be a triangle with incenter

be any point in the interior of

. Then we obtain three lines

. Then the reflections of these lines across lines

always concur at a point

which is called the isogonal conjugate of

. (The proof of this concurrence follows from readily from Trig Ceva.) When

is the point for which

Examples of pairs of isogonal conjugates include the following.

is the midpoint of arc

of the circumcircle of

. Indeed, so is the circumcenter of triangle

In fact, it turns out that we can generalize this result for arbitrary isogonal conjugates as follows.

are inverses with respect to the circumcircle of

be the desired circumcenters. It’s clear that both

lie on the perpendicular bisector of

. Angle chasing allows us to compute that

. But the reader can check that

. Using this we can show that

), we recover the Fact 5 we mentioned above. When we take

to be the orthocenter and

is the inverse of the circumcenter of

. But the inverse of the circumcenter of

is the reflection of

. Thus we derive that

have circumcircles which are just reflections over

You may already be aware of the nine-point circle, which passes through the midpoints and feet of the altitudes of

. In fact, we can obtain such a circle for any pair of isogonal conjugates.

be isogonal conjugates in the interior of

. The pedal triangles of

share a circumcircle. Moreover, the center of this circle is the midpoint

we recover the nine-point circle. Of course, the incircle is the special case

be the pedal triangles. We leave the reader to check that

are concyclic. The circumcenter of these four points is the intersection of the perpendicular bisectors of segments

Similarly work with the other vertices shows that

is indeed the desired circumcenter.

Corollary If the point

is reflected about the sides

, then the resulting triangle has circumcenter

We can actually derive the following remarkable result from the above theorem.

is inscribed in triangle

Of course, the incircle is just the special case when the ellipse is a circle. 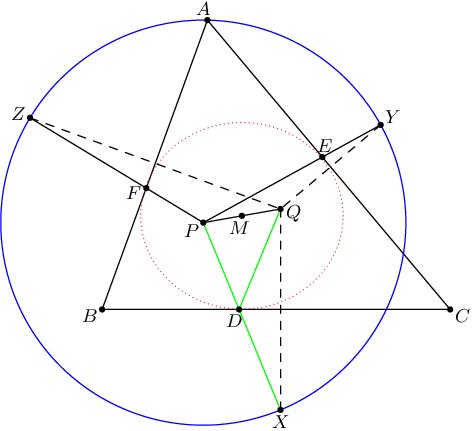 Proof: We will deduce this from the corollary. Let the ellipse be tangent at points

. Moreover, let the reflection of

about the sides of

. By definition, there is a common sum

Because of the tangency condition, the points

are collinear. But now

is the isogonal conjugate of

The converse of this theorem is also true; given isogonal conjugates

we can construct a suitable ellipse. Moreover, it’s worth noting that the lines

are also concurrent; one proof is to take a projective transformation which sends the ellipse to a circle.

Using this theorem, we can give a “morally correct” solution to the following problem, which is IMO Shortlist 2000, Problem G3.

the orthocenter of an acute triangle

. Show that there exist points

by a cyclic hexagon, as shown. Suppose

, though the triangles have opposite orientations. Because

, which gives the collinearity.

Thanks to R Alweiss and heron1618 for pointing out a few typos, and Daniel Paleka for noticing a careless application of Brianchon’s theorem.