This blog post corresponds to my newest olympiad handout on mixtilinear incircles.

My favorite circle associated to a triangle is the

-mixtilinear incircle. While it rarely shows up on olympiads, it is one of the richest configurations I have seen, with many unexpected coincidences showing up, and I would be overjoyed if they become fashionable within the coming years.

are the midpoints of the arcs.

As a challenge to my recent USAMO class (I taught at A* Summer Camp this year), I asked them to find as many “coincidences” in the picture as I could (just to illustrate the richness of the configuration). I invite you to do the same with the picture above.

The results of this exercise were somewhat surprising. Firstly, I found out that students without significant olympiad experience can’t “see” cyclic quadrilaterals in a picture. Through lots of training I’ve gained the ability to notice, with some accuracy, when four points in a diagram are concyclic. This has taken me a long way both in setting problems and solving them. (Aside: I wonder if it might be possible to train this skill by e.g. designing an “eyeballing” game with real olympiad problems. I would totally like to make this happen.)

The other two things that happened: one, I discovered one new property while preparing the handout, and two, a student found yet another property which I hadn’t known to be true before. In any case, I ended up covering the board in plenty of ink. 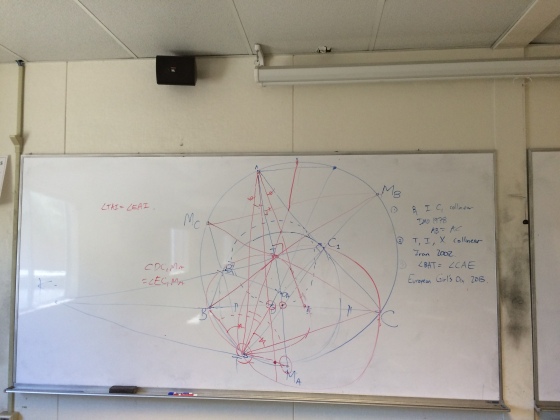 To put that all into one picture: 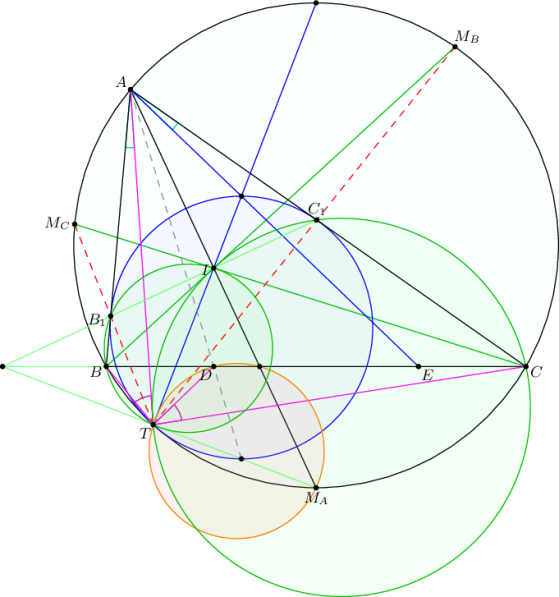