In this post I’m hoping to say a bit about the process that’s used for the problem selection of the recent USEMO: how one goes from a pool of problem proposals to a six-problem test. (How to write problems is an entirely different story, and deserves its own post.) I choose USEMO for concreteness here, but I imagine a similar procedure could be used for many other contests.

I hope this might be of interest to students preparing for contests to see a bit of the behind-the-scenes, and maybe helpful for other organizers of olympiads.

The overview of the entire timeline is:

Now I’ll talk about these in more detail.

The USA has the rare privilege of having an extremely dedicated and enthusiastic base of volunteers, who is going to make the contest happen rain or shine. When I send out an email asking for problem proposals, I never really worry I won’t get enough people. You might have to adjust the recipe below if you have fewer hands on deck.

When you’re deciding who to invite, you have to think about a trade-off between problem security versus openness. The USEMO is not a high-stakes competition, so it accepts problems from basically anyone. On the other hand, if you are setting problems for your country’s IMO team selection test, you probably don’t want to take problems from the general public.

Submission of the problem is pretty straightforward, ask to have problems emailed as TeX, with a full solution. You should also ask for any information you care about to be included: the list of authors of the problem, any other collaborators who have seen or tried the problem, and a very very rough estimate of how hard the difficulty is. (You shouldn’t trust the estimate too much, but I’ll explain in a moment why this is helpful.)

Ideally I try to allocate 5-10 weeks between when I open submissions for problems and when the submission period ends.

It’s at this time you might as well see who is going to be interested in being a test-solver or reviewer as well — more on that later.

Once the submission period ends, you want to then collate the problems into a packet that you can send to your reviewers. The reviewers will then rate the problems on difficulty and suitability.

A couple of minor tips for setting the packet:

More substantial is the choice of which problems to include in the packet if you are so lucky to have a surplus of submissions. The problem is that reviewers only have so much time and energy and won’t give as good feedback if the packet is too long. In my experience, 20 problems is a nice target, 30 problems is strenuous, anything more than that is usually too much. So if you have more than 30 problems, you might need to cut some problems out.

Since this “early cutting” is necessarily pretty random (because you won’t be able to do all the problems yourself singe-handedly), I usually prefer to do it in a slightly more egalitarian way. For example, if one person submits a lot of problems, you might only take a few problems from them, and say “we had a lot of problems, so we took the 3 of yours we liked the most for review”. (That said, you might have a sense that certain problems are really unlikely to be selected, and so you might as well exclude those.)

You usually also want to make sure that you have a spread of difficulties and subjects. Actually, this is even more true if you don’t have a surplus: if it turns out that, say, you have zero easy algebra or geometry problems, that’s likely to cause problems for you later down the line. It might be good to see if you can get one or two of those if you can. This is why the author’s crude estimates of difficulty can still be useful — it’s not supposed to be used for deciding the test, but it can give you “early warnings” that the packet might be lacking in some area.

One other useful thing to do, if you have the time at this point, is to edit the proposals as they come in, before adding them onto the packet. This includes both making copy edits for clarity and formatting, as well as more substantial changes if you can see an alternate version or formulation that you think is likely to be better than the original. The reason you want to do this step now is that you want the reviewer’s eyes on these changes: making edits halfway through the review process or after it can cause confusion and desynchronization in the reviewer data, and increases the chances of errors (because the modifications have been checked fewer times).

Reviewers are asked to submit a difficulty rating and quality rating for each problem. The system I’ve been using, which seems to work pretty well, goes like follows:

This is what I converged on as far as scales that are granular enough to get reasonable numerical data without being so granular that they are unintuitive or confusing. (If your scale is too granular, then a person’s ratings might say more about how a person interpreted the scale than the actual content of the problem.) For my group, five buckets seems to be the magic number; your mileage may vary!

More important is to have lots of free text boxes so that reviewers can provide more detailed comments, alternate solutions, and so on. Those are ultimately more valuable than just a bunch of numbers.

I just use Google Forms to collect all the data. There’s a feature you can enable that requires a sign-in, so that the reviewer’s responses are saved between sessions and loaded automatically (making it possible to submit the form in multiple sittings).

Choosing the draft of the test

Now that you have the feedback, you should pick a draft of the test! This is the most delicate part, and it’s where it is nice to have a co-director or small committee if possible so that you can talk out loud and bounce ideas of each other.

For this stage I like to have a table with the numerical ratings as a summary of what’s available. The way you want to do this is up to you, but some bits from my workflow: 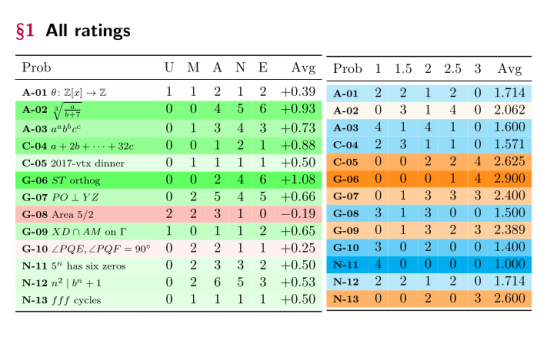 Here is a output made with fake data. The Python script used to generate the table is included here, for anyone that wants to use it.

One thing to keep in mind is that when choosing the problems is that there are two most obvious goals are basically orthogonal. One goal is to have the most attractive problems (“art”), but the other is to have an exam which is balanced across difficulty and subject composition (“science”). These two goals will often compete with each other and you’ll have to make judgment calls to prioritize one over the other.

A final piece of advice is to not be too pedantic. For example, I personally dislike the so-called “Geoff rule” that 1/2/4/5 should be distinct subjects: I find that it is often too restrictive in practice. I also support using “fractional distributions” in which say a problem can be 75% number theory and 25% combinatorics (rather than all-or-nothing) when trying to determine how to balance the exam. This leads to better, more nuanced judgments than insisting on four categories.

This is also the time to make any last edits you want to the problems, again both copy edits or more substantial edits. This gives you a penultimate draft of the exam.

If you can, a good last quality check to do is to have a round of test-solving from an unbiased group of additional volunteers who haven’t already seen the packet. (For the volunteers, this is a smaller time commitment than reviewing an entire packet so it’s often feasible as an intermediate commitment.) You ask this last round of volunteers to try out the problems under exam-like conditions, although I find it’s not super necessary to do a full 4.5 hours or have full write-ups, if you’ll get more volunteers this way. A nice number of test-solvers is 5-10 people.

Typically this test-solving is most useful as a sanity check (e.g. to make sure the test is not obviously too difficult) and for any last minute shuffling of the problems (which often happens). I don’t advise making drastic changes at this point. It’s good as a way to get feedback on the most tricky decisions, though.

After any final edits, I recommend sending a copy of the edited problems and solutions to the reviewers and test-solvers. They’re probably interested to know what problems made the cut, and you want to have eyes going through the final paper to check for ambiguities or errors.

I usually take the time to also send out some details of the selection itself: what the ratings for the problems looked like, often a sentence or two for each problem about the overall feedback, and a documentation of my thought process in the draft selection. It’s good to give people feedback on their problems, in my experience the authors usually appreciate it a lot, especially if they decide to re-submit the problem elsewhere.

And that’s the process.

One thought on “USEMO Problem Development, Behind the Scenes”