Pictures, thoughts, and other festives from the 2019 Romania Masters in Math. See also the MAA press release.

Po-Shen Loh and I spent the last week in Bucharest with the United States team for the 11th RMM. The USA usually sends four students who have not attended a previous IMO or RMM before.

(Yes, there are only nine gold medals this year!)

The team score is obtained by summing the three highest scores of the four team members. The USA won the team component by a lofty margin, making it the first time we’ve won back to back. I’m very proud of the team.

RMM 2019 team after the competition (taken by Daniel Zhu’s dad):

McDonald’s trip. Apparently, the USA tradition is that whenever we win an international contest, we have to order chicken mcnuggets. Fortunately, this time we didn’t order one for every point on the team (a silly idea that was unfortunately implemented at IMO 2018).

The winner plate. Each year the winning country brings it back to get it engraved, and returns it to the competition the next year. I will have it for the next while. 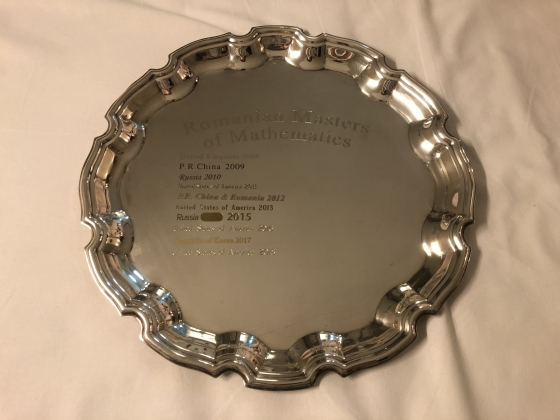 And a present from one of the contestants (thanks!):

Problems, and thoughts on them

from the number on the board. On Amy’s turn, she chooses a positive integer

and raises the number on the board to the

th power. Bob wins if the number on the board ever reads zero. Can Amy prevent Bob from winning?

I found this to be a cute easy problem. The official solution is quite clever, but it’s possible (as I myself did) to have a very explicit solution using e.g. the characterization of which integers are the sum of k squares (for

be an isosceles trapezoid with

be the midpoint of

, respectively. The tangent to

and the tangent to

There are nice synthetic solutions to this problem, but I found it much easier to apply complex numbers with

as the unit circle, taking as the phantom point

the intersection of tangents. So, unsurprisingly, all our team members solved the problem quite quickly.

I suspect the American students who took RMM Day 1 at home (as part of the USA team selection process) will find the problem quite easy as well. Privately, it is a bit of a relief for me, because if a more difficult geometry had been placed here I would have worried that our team selection this year has (so far) been too geometry-heavy.

be a positive real number. Prove that if

is sufficiently large, then any simple graph on

vertices with at least

A really nice problem with a short, natural problem statement. I’m not good at this kind of problem, but I enjoy it anyways. Incidentally, one of our team members won last year’s IOI, and so this type of problem is right up his alley!

Show that for every positive integer

there exists a simple polygon (not necessarily convex) admitting exactly

A fun construction problem. I think it’s actually harder than it looks, but with enough time everyone eventually catches on.

I found this problem surprisingly pernicious. Real functional equations in which all parts of the equation are “wrapped by f” tend to be hard to deal with: one has to think about things like injectivity and the like in order to have any hope of showing that f actually takes on some desired value. And the answer is harder to find that it seems — it is (rightly) worth a point even to get the entire answer correct.

Fortunately for our team members, the rubric for the problem was generous, and it was possible to get 4-5 points without a complete solution. In the USA, olympiad grading tends to be even harsher than in most other countries (though not as Draconian as the Putnam), so this came as a surprise to the team. I jokingly told the team afterwards that they should appreciate how I hold them to a higher standard than the rest of the world.

(Consequently, the statistics for this problem are somewhat misleading — the average score makes the problem seem easier than it actually is. In truth there were not that many 6’s and 7’s given out.)

Find all pairs of integers

, such that the following holds:

For any monic polynomial

with integer coefficients and for any prime

Unlike problem 5, I found this problem to be quite straightforward. I think it should have been switched with problem 5. Indeed, all our team members produced complete solutions to this problem.

So I am glad that our team has learned by now to try all three problems seriously on any given day. I have seen too many times students who would spend all their time on a P2 and not solve it, only to find out that P3 was of comparable or easier difficulty.