As part of the 18.099 Discrete Analysis reading group at MIT, I presented section 4.7 of Tao-Vu’s Additive Combinatorics textbook. Here were the notes I used for the second half of my presentation.

We aim to prove the following result.

contains a proper arithmetic progression of length at least

for some absolute constant

The methods that we used with Bohr sets fail here, because in the previous half of yesterday’s lecture we took advantage of Parseval’s identity in order to handle large convolutions, always keeping two

this causes us to be stuck. So, we instead use the technology of

is a dissociated set if all

For such sets we have the Rudin’s inequality (yes, Walter) which states that

Disassociated sets come up via the so-called “cube covering lemma”:

. Then we can partition

Finally, we remind the reader that

Since we don’t have Bohr sets anymore, the way we detect progressions is to use the pigeonhole principle. In what follows, let

be the shift of

contains an arithmetic of length

Proof: Apply the pigeonhole principle to find an

Then the claim follows.

dissociated. Then for any set

be large and note 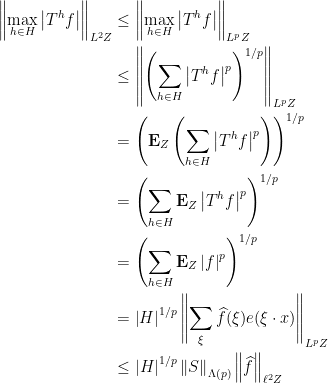 Then by Parseval and Rudin,

We may then take

has nonzero values of “uniform” size.

is “uniform in size” across its support, in the sense that

Then one can find

Proof: Use the cube covering lemma to put

is contained in the cube of

over its Fourier transform as

First, we can bound the “leftover” bits in 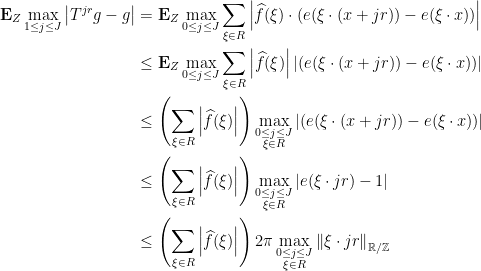 are covered by a cube of

Let’s then bound the contribution over each dissociated set. We’ll need both the assumption of uniformity and the proposition we proved for dissociated sets. 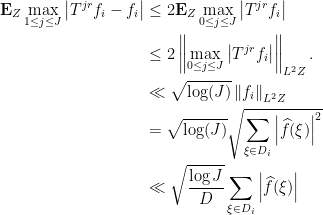 where the last step is by uniformity of

. Now combine everything with triangle inequality.

Without loss of generality

. We will have parameters

which we will select at the end.

Our goal is to show there exists some integer

Now we cannot apply the uniformity estimate directly since

is probably not uniform, and therefore we impose a dyadic decomposition on the base group 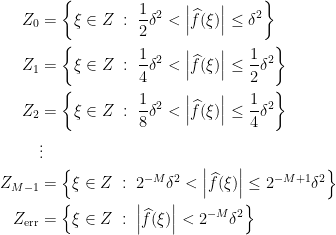 Then as before we can decompose via Fourier transform to obtain

Now we can apply the previous lemma to get for each

; hence by summing and using the fact that

As for the “error” term, we bound 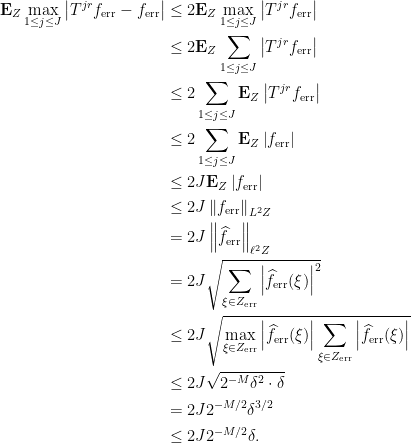 Thus, putting these altogether we need to find

, so the first and third terms are less than

from which we deduce

Thus it suffices that

. Now we recall the result that

and so it suffices for us that